Is it possible to write a book in 24 hours? I might have said no . . . until I did it. Okay, so when I was 18, Mom suggested that I write a book for the corn maze. At first, I didn't really like the idea, but as she kept bringing it up, it grew on me, and eventually, I sat down to give it a try.
I wrote several rough drafts, and finally I completed one that I was semi happy with, but when I let my sister read it, she said it was way too melodramatic and sad for a kid's book. I was about to give up on the idea, but Mom encouraged me to give it one more try.
I sat down, that evening, and started writing, and when I went to bed that night, (or early the next morning as the case may be,) I was over half-done with a book that I thought would work. I got up the next morning and kept at it, and right after lunch, I finished the rough draft to the current Mystery at the Corn Maze book.
No, I don't think I could do it again. At least not on any book longer than that one, but thankfully, The Mystery at the Corn Maze is an earlier reading book and not as long. It's geared for 8-12 year-olds and has several real stories mixed into the fiction.
Stories from the corn maze. Like the time vandals ran a four-wheeler through the field, or the time someone hung our scarecrow from the fort walls.
If you're an entrepreneur, and you're super familiar with the corn maze world, you may recognize a few other hidden references in the book as well. ;) 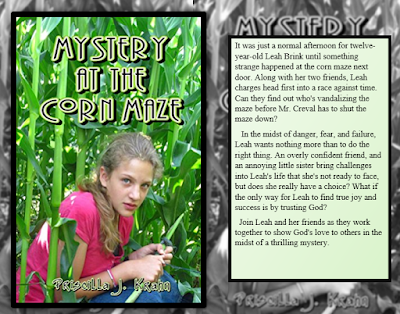